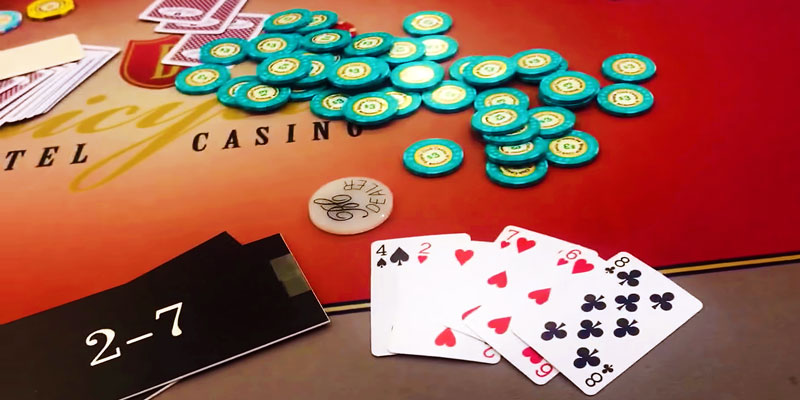 This poker game has become quite popular practically from the moment it was established. It is quite interesting to play, the primary goal being to achieve the lowest possible hand in order to win. You may know this game by other names, such as Deuce to Seven Triple Draw, or simply 2–7 Triple Draw. And as that name would suggest, there are three rounds of drawing cards, during which you can discard the unfavorable cards, replace them, or skip this and keep the ones you have. The name gives you the first and most important rule you need to follow in order to win — get a hand consisting of 7-5-4-3-2 cards.

Moreover, you should watch out for any Aces in the deck since it counts as a high card and can decrease your chances of winning. Also, flushes and straights do count, but they count as some of the worst hands you can get. Speaking of, the duplicates are also to be avoided, so you should dismiss them as soon as it is your turn to draw.

This game gives you a solid number of opportunities to get a winning hand since there is no limit whatsoever when it comes to the number of cards you can draw. However, you should keep a steady pace and follow the unspoken “rule of thumb” that says you shouldn’t draw more than 3 cards at a time.

Considering the fact that this is a draw game, you will need a dealer that will supervise your game, deal cards to players, collect the bets, and take care of everything else in order for the game to go without a hitch.

First, you will need to post the blinds. Namely, this is done in the same way as in Texas Hold’Em and many other poker versions — the small blind is placed by the player to the left of the dealer, and then the next player will post the big blind. Also, bear in mind that this poker variant can be played without a dealer but rather with a dealer button that will denote which player will assume that role. So in this case, the players will start posting the blinds starting from the left of the button.

Speaking of posting the blinds, the important thing to remember here is that Triple Draw poker is a fixed-limit game, meaning there is a limit to the sum you can bet. This should not discourage you, however, since it only means you will wager smaller amounts in the beginning and gradually move up, according to the expert players.

The Rules of Drawing

After you have posted the bets, each player is dealt five cards face down, which are for your eyes only. Depending on which cards you were dealt, you can decide what your move will be when it’s your turn to draw. A poker player can draw whatever number of cards they want, which means the deck will run out of cards much faster than in other games. When that happens, the dealer will just use the cards that were dismissed by players and shuffle them to keep the game going.

Also, there is a possibility that a player will want to keep all their cards without drawing any new ones or discarding the existing ones. This typically means that they already have quite a strong hand and by making the decision to keep things as they are, they are applying the “Stand Pat” rule.

Moreover, a player can choose to discard all five of their cards. You shouldn’t be surprised by this since it happens quite often though some may consider it a risky move. If this happens, the player will be dealt only four cards first and then get the last one after all the other players took their turns in the drawing. Once the three drawing rounds are finished, the players will go into the showdown, a round during which they reveal and compare their cards in order to decide the winner.

Ace to Five and Ace to Six

Even though Triple Draw poker is commonly referred to as Deuce to Seven, there is also another version that is quite beloved among the players, and it’s called Ace to Five Triple Draw.

In this version of poker, the lowest possible hand is the goal as well, but that hand consists of the following cards 5-4-3-2-A. As you can tell, the Aces are counted as low cards, so you should look forward to being dealt these cards. Ace to Five lowball can be played as a single draw, double draw, or rather a triple draw game, which is the most appealing version to many poker players.

Additionally, one other lesser known version of this game is called Ace to Six, and the winning hand is created with the following cards: 6-4-3-2-A. Aces are once again counted as low, and this game is otherwise known as the London Lowball, a version of the Seven-Card Stud. So Ace to Six can also be played as a triple draw game.

Triple Draw poker is quite an appealing game to the players around the world, especially if you are just starting out with casino card games. You have three rounds during which you can improve your hand, which makes things a lot easier. Many poker sites allow you to practice this game as much as you need to before trying your luck with real money, which is very assuring. In addition, you will notice that the principles of Triple Draw poker are often used in many other poker variations, which only contributes to its popularity.